PRP to cure hair loss: what are the outcomes?

Platelet-rich plasma (PRP) has emerged to be very useful in selected patients and androgenetic alopecia in improving hair growth and density and reducing hair loss. Find here below the two papers published on international journals as an overview of our achievements and outcomes.
The last paper is a result of a research conducted in cooperation with Institute of Anatomic Pathology, University of Rome Tor Vergata and biologists who work within the Institute, and a dermatologist of the Catholic University of the Sacred Heart of Rome. The article has been published on the scientific journal Stem Cell Translational Medicine Journal with reference to the use of PRP on androgenetic alopecia patient’s treatment (the most common hair loss disorder affecting both sexes, mainly white men) for hair regrowth and hair cure.
The paper, released in November 2015, is currently one of the most important one on this topic. According to Pubmed (a search engine for life sciences and biomedical topics) there aren’t any other articles on the same topic published on journals of higher impact factor. Moreover in the entire world there are just seventeen scientific articles on this topic (just digit “PRP hair loss” on search engines), four of which have been conducted in Italy, and two of them have been conducted by our plastic surgeons of the University of Rome Tor Vergata.
This paper describes achievements in terms of hair regrowth and hair loss reduction in 23 enrolled male patients affected by androgenetic alopecia who underwent three treatments at 30-day intervals. The procedure consist in taking 55ml of blood from the patient that is centrifuged for ten minutes as to obtain 23ml of Platelet Rich Plasma that is injected in selected areas of the scalp.
The core of the innovation consist in the fact that on the same patient PRP was injected on half of the selected scalps with pattern hair loss, the other half was treated with placebo (injection of physiological solution). The outcomes have shown a mean increase of 33.6 hairs in the target area as big as a two-euro coin.

Evaluations have been conducted by an independent observer (a dermatologist of the Catholic University of the Sacred Heart of Rome – who is independent from our University) through standardized phototrichograms (briefly, a phototrichogram is an high definition image of the target area – an area as big as a two-euro coin treated with PRP- for measuring hair count number, vellus hair, hair density ecc.).
The image analysis is showed in the linked article in image 1, where in A and B preoperative hair count is 67.5 hairs per cm2 and density is 120.1 hairs per cm2. In 1C and D images postoperative hair count was 128.5 hairs per cm2 density was 228.6 hairs per cm2.
In preoperative and postoperative histological analysis (image 2) is showed epidermis thickness increased after PRP treatment (as it was a rejuvenation of hair skin) besides augmentation of the number of follicles (meaning hair regrowth) than the no-treated areas.
-Immunohistochemistry analysis has been performed (through which follicles cells proliferation is evaluated). The outcomes are: follicles cells proliferation capability increased after PRP treatment.
– Photographic analysis of clinical results (image 5) shows clear improvements: patients can observe by themselves an increase in hair density and they have reported an improvement also in terms of quality (as it was sturdier to the touch).
Of the 23 patients enrolled, 3 were excluded as a consequence of Finasteride e Minoxidil and other medication for hair loss usage before the treatment. The aim of our study is to demonstrate with scientific rigor the efficacy of autologous PRP in androgenetic alopecia according to the Norwood-Hamilton classification between II and IV stages (patients with hair loss localized to the frontal, temporal and parietal areas, which is not a complete baldness that affects the whole scalp or immunosuppressed).
The treatment resulted to be constant for the first year (hair loss prevention, hair regrowth and thickening) after which few patients reported an irrelevant hair loss tendency, but still satisfactory.

Advanced procedure, based on mechanic controlled PRP injection in the scalp.

PRP hair loss: how long does the treatment last?

Generally it takes from 20 to 45 minutes outpatient surgery. It has to be performed only in licensed clinics and with approval of the transfusional service or with the presence of the hospital transfusion team.

PRP hair loss: is it painful?

It is a painless treatment. We observed discomfort in some patients who consequently underwent local anesthesia before proceeding. Today, it is used a tool that allows us to inject PRP in selected areas of the scalp (see video below). We can measure out the right quantity of PRP that has to be injected and calculate the suitable depth of needle penetration without any pain for the patient. This is a radical change comparing with the past procedures. 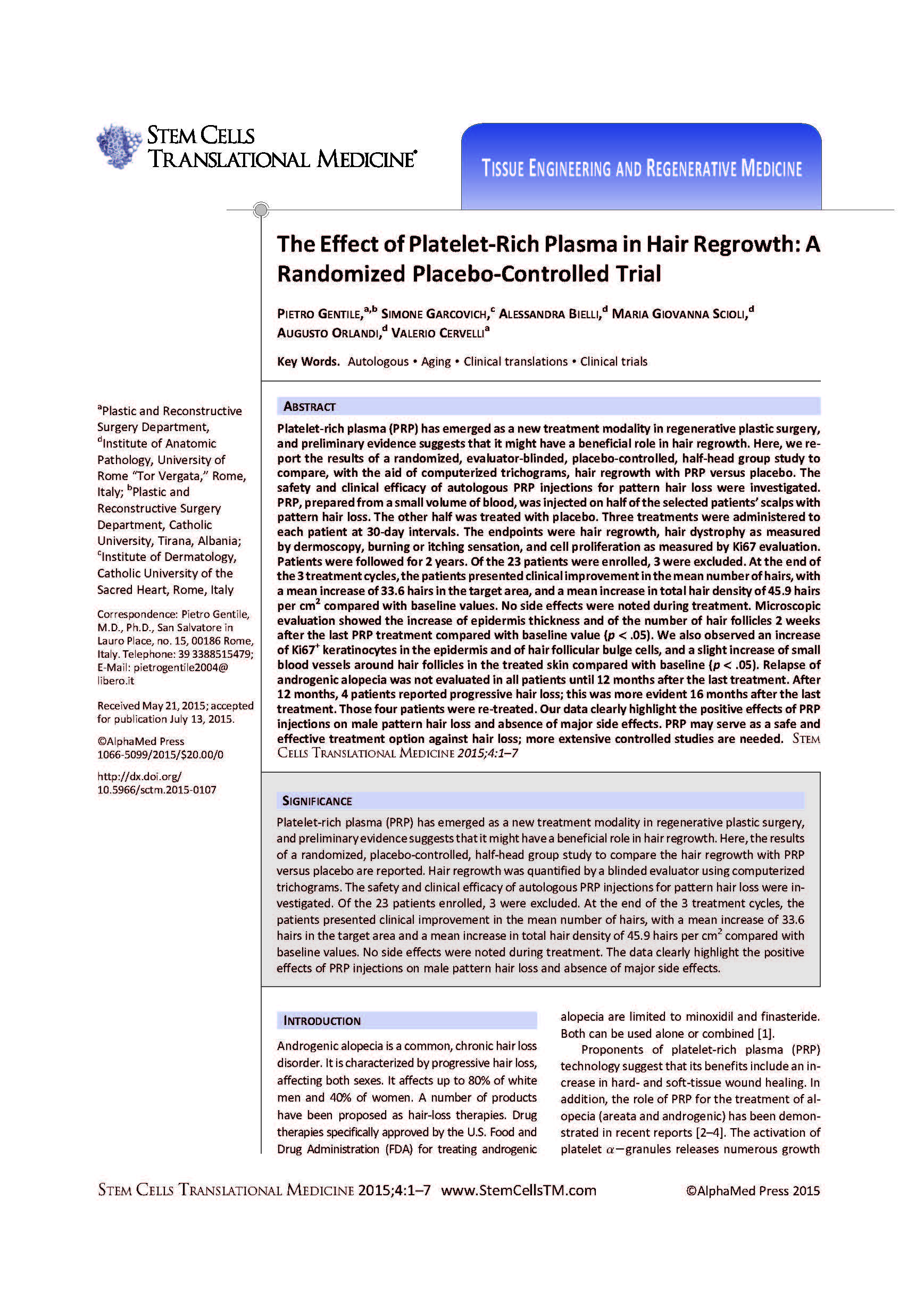 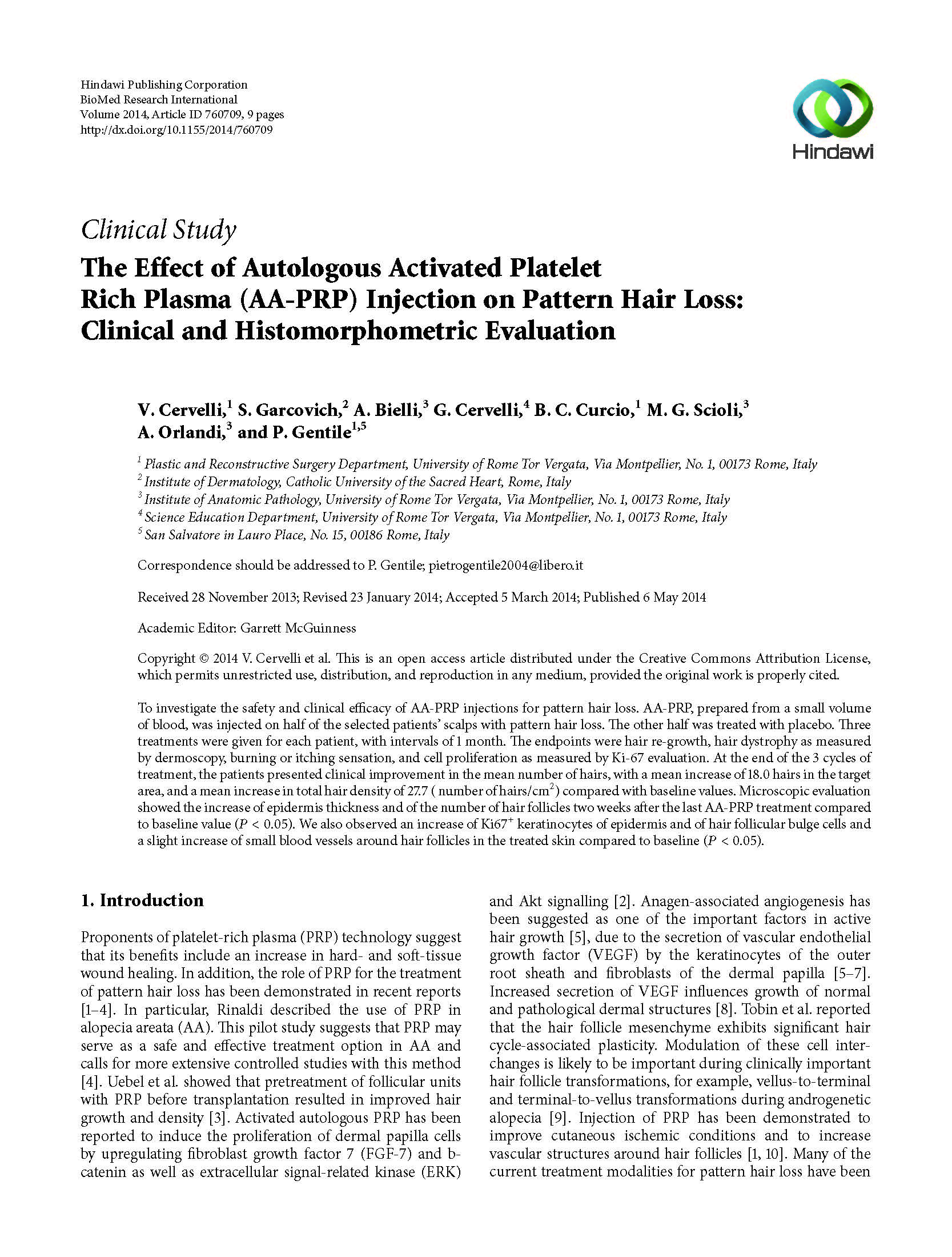